Knowing the inflatable trade spells success for the Keys brothers, in BC and back home in Ireland. 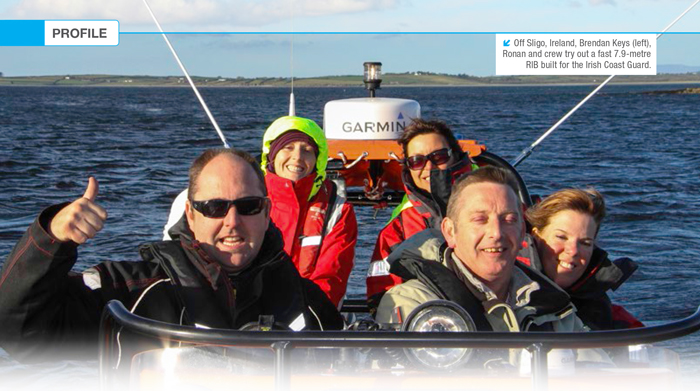 This is a story about two brothers in two countries, and how the booming popularity of inflatable boats on a global scale has changed both of their lives.

The brothers are Brendan and Ronan Keys, born and raised in the port of Drogheda, on the east coast of Ireland just north of Dublin. Today, Brendan’s home is Vancouver, where he is a partner in GA Checkpoint Yamaha, one of BC’s leading inflatable and outboard dealers, while Ronan operates Inland Inflatable Services, Ireland’s leading inflatable sales and service firm, in Sligo, on the country’s west coast. As newcomers to Canada in the late ‘80s, they found work repairing and selling inflatables just as the boom in rubber boats began, and they’ve never really looked back.

Brendan, now 43, and Ronan, 42, share the outgoing charm and sly wit you expect of the Irish. The eldest of eight children, they say they knew nothing about boats at home but grew up tinkering with cars in their parents’ barn. When they came to Ontario in 1988, Ronan answered an ad for a “mechanically-minded person with upholstery skills” and found himself working at then Inland Inflatable Boats and Services (now Inland Liferaft and Marine of Etobicoke), then North America’s largest Zodiac dealer.

“The upholstery skills meant fixing inflatable boats,” says Ronan. Not long after he started, he was asked if he knew anyone else looking for work— and Brendan got his start as well. While Ronan returned to Ireland in 1990, Brendan stayed at Inland for five years, learning both service and sales, as well as establishing a long-term relationship with Yamaha outboards when Inland became a dealer. He relocated to Vancouver in 1992 to be near his wife Birgit’s family, and joined Adventure Marine Inflatables, selling, rigging and servicing boats for the Zodiac, Zeppelin and Yamaha dealer.

In 1998 he joined Yamaha as district sales manager for marine products, building the manufacturer’s business with marine dealers as well as the West Coast’s proliferation of fishing camps and lodges: “We definitely grew Yamaha’s market share in BC at that time. It was 35 percent when I started and over 50 percent when I left.”

Brendan concluded his time at Yamaha as Western Canada regional sales manager from 2004 to 2010, then joined GA Checkpoint as a partner with the goal of growing the motorsport dealer’s marine business. The challenge “is a larger nut to crack,” says Brendan but the dealership has so far expanded its outboard business, added more lines of inflatables and aluminum fishing boats, and opened a second location in suburban Abbotsford.

With his own hands-on experience in all facets of the inflatable game, he’s proud of the fact that GA Checkpointis the only Lower Mainland dealer set up to sell, rig, service and repair inflatables. And his timing could be no better: “The inflatable boat business is going through the roof.”

For his part, Ronan returned to find little work in a much smaller marine industry in Ireland: “There was one company back home that repaired inflatables… badly!” He qualified as a motor mechanic but put his inflatable skills to work fixing boats in his spare time “because there was no one else doing it.”

Meanwhile, rigid-hull inflatables were fast becoming a big business in nearby Britain. After moving to Sligo in 1999 as a vehicle inspector, Ronan started his own business servicing and repairing inflatables and RIBs in 2002, and quickly found himself building boats as well. He delivered six rugged 9-metre RIBs powered by inboard Yanmar diesels to a Dublin Bay ecotourism operator (“whale-watching… without the whales,” as he puts it) and expanded his service business with dive clubs, police marine units, the Irish airport rescue service and the British military, regularly flying to Scotland to carry out emergency repair jobs.

He moved to larger premises in 2004, becoming a Zodiac and Yamaha dealer, then bought a still-larger facility with a showroom in 2012. His company’s work now includes service, major overhauls and new construction for clients such as the Irish Coast Guard and the Dublin Fire Brigade and other fire services. Inland is Ireland’s largest Yamaha dealer, and the Irish distributor for Sidney, BC-built Shockwave highperformance shock-mitigating marine seats, now fitted in all of the country’s coast guard vessels (see sidebar).

“The mainstay of the business now is RIBs, for the coast guard, fire service, civil defense. We are the only RIB service centre in Ireland. And we overhaul not just the boats but all systems, engines, electrics, instruments, AIS and seats.”

It’s clear that learning their way around inflatable boats at exactly the moment when the rugged, versatile craft began to take over a wide range of markets, from yacht tenders to tourism, military and commercial uses, has been a boon for the Keys brothers.

“This is a tricky business, an interesting business,” says Brendan. “It’s very specialized. You have to have guys who understand the products and how to sell and service them. That’s why it’s difficult for anyone to set up as an inflatable business and succeed.

“Twenty-five years in the business and we both still get up every day and look forward to getting into work—it’s always different.”

And the trade hasn’t stopped with the two eldest Keys. Brother Hugh operates a mobile marine service, and brother Eoin a chandlery. (“They’re in the business because we dragged them into it!”) And a second generation has entered the trade. Ronan’s son Gerard works for Brendan at GA Checkpoint, as does Brendan’s daughter Krysta.

Ronan says the boat business has simply treated he and Brendan well: “The amazing thing about the marine industry is that you can make a name for yourself starting from sweeping the floor!”

Not bad for a couple of Irishmen with upholstery skills.